In pure machining terms, the manufacturing industry’s continual quest to produce correctly finished workpieces at a certain cost in a certain amount of time has reached the end of the line. Unless a breakthrough tooling solution appears, traditional approaches focused solely on boosting metal removal rates will at best squeeze out at a few percentage points of increased output.

Significant future improvements in metalcutting productivity, quality and reliability will come from a data-driven fourth revolution in manufacturing technology. The new developments represent the latest stage of a lengthy evolution. The first manufacturing revolution involved the move from home-based crafting activities to production in factories with centralized energy sources that powered manufacturing machinery. Mechanical shafts and belts distributed power from water wheels or steam among a factory’s machines. Use of more convenient and efficient electrical energy followed.

The first factories turned out products one by one. In the second revolution, output expanded from individual piecework to mass production. The development of integrated systems such as assembly and transfer lines and automation expedited production of high volumes of identical parts. The third revolution in manufacturing technology came with the introduction of numerical machine control and later computer-based control and automation, providing increased accuracy and flexibility and facilitating execution of lower volume, higher part variety manufacturing scenarios.

Now manufacturing is in the midst of a fourth revolution, in Europe referred to as Industry 4.0, which integrates present-day data acquisition, storage and sharing technologies into the manufacturing process. Networked cyber-physical systems analyse ongoing operations, gather and compare data and route the information to a central server or cloud to compare it with established machining models. The systems use the results to direct parameter adjustments that optimise machining processes.

The concept of data-directed manufacturing has been around for quite some time. In the 1980s, metalworking researchers worked to create adaptive tool monitoring and control systems intended to measure cutting conditions, compare the data to set process standards, then adjust machining parameters to stabilize operations and minimise the occurrence of unforeseen machining events.

The systems employed sensors and probes to measure process factors such as cutting forces, power, torque, temperatures, surface roughness and acoustic emissions. Unfortunately, sensor technology of that time was insufficient when it came to the necessary speed and accuracy to be fully effective, and computers lacked the processing speed and memory needed to handle large amounts of data in real-time fashion. Additionally, advanced data acquisition and management technology was extremely expensive.

Those shortcomings made in-process parameter adjustment nearly impossible. The result was a binary or black-and-white situation. If collected data exceeded set maximums, the machining process simply is stopped. The maximums were set with insufficient knowledge of and insight into cutting processes. In addition to lacking sufficiently advanced data processing technology, missing was the key concept that most of the various physical phenomena in the machining process – temperature, forces, loads – are not static conditions but dynamic ones that constantly change.

To illustrate (Figure 1.1/1.2), cutting forces in a certain operation may average 1,000 Nm. But about 50 percent of the time, those forces are above 1,000 Nm, and below that level during the remaining time. If the system’s cutoff level is set at 1,000 Nm, the process stops because the forces appear to be too high. (Note that the graphs show measurements made across a period of eight microseconds, demonstrating how rapidly the forces change. Data processing at that speed was unavailable in the 1980s.) 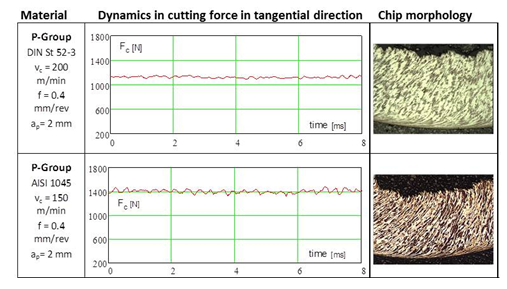 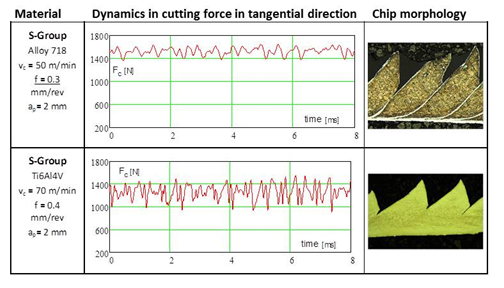 Collect and connect the elements

It is important to understand the roles of the different process elements. There are, in fact, more than 80 measurable elements that influence machining operations. It is crucial that all the elements be collected, connected and interactive. If an element is unaccounted for, the effects can be unexpected and uncontrollable.

After collection and analysis, data have to be prioritized regarding each element’s impact on the process. It is clear that tooling has very significant effects. A collection of production tools works together in metalcutting: machine tool, CAM system, cutting tool, fixturing and clamping and coolant, and in Industry 4.0, sensors and data retrieval and transmission systems (figure 2). 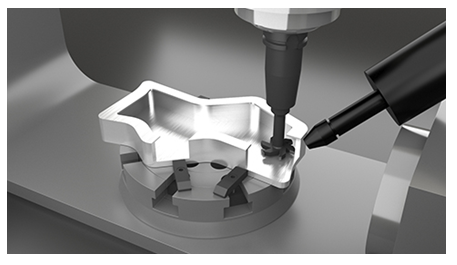 At the core of metalcutting is the interaction of the cutting tool with the workpiece. However, in the traditional approach to developing machining processes, the cutting tool often is the last consideration. When planning to produce a workpiece, users typically first choose the machine tool, then the fixturing, the cooling system and other equipment and finally the cutting tool. This results in a situation where a cutting tool has to make up for less optimum choices of other process elements.

For example, if the selected machine tool is a bit unstable, a cutting tool that generates lower cutting forces will be needed to compensate for the lack of stability. However, that tool may fall short when it comes to maximising productivity in the particular workpiece material being machined. In that case, the end effect of choosing the cutting tool last is a subpar manufacturing system that operates well below its full potential.

Fortunately, many individuals in the manufacturing industry now realise that it is more appropriate to work in reverse. Shops should first select the cutting tool after considering the final product’s shape and features, its workpiece material and the required level of quality. The cutting tool – specific material and geometry – should provide the most productivity and meet the specific requirements of the process. Then the choices of the other process elements can focus on creating an environment in which that cutting tool will function at its full capacity.

After a shop chooses the elements of the machining process, interaction of the elements must be balanced to achieve both maximum productivity and minimum costs. And there exists persistent manufacturing issues involved in machining output and expense (Figure 3).

Obvious process factors include tool performance along with tool and machining costs. Those costs that are not so obvious include the ones resulting from unreliable machining processes that produce poor quality or rejected parts, while others contribute to unforeseen downtime. 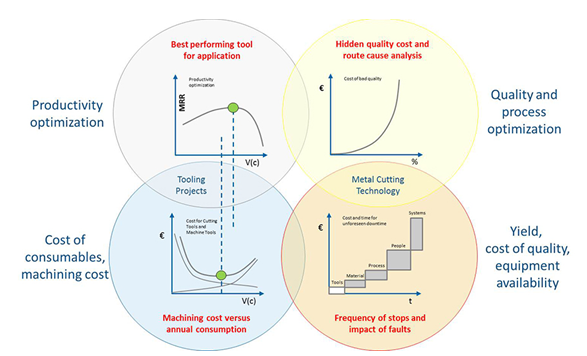 Although planned activities such as programming and maintenance are part of non-machining time, other factors, such as operator errors, broken tools, damaged workpieces and system problems needlessly increase process times and expense. Cutting tools represent a minor percentage of lost time, as do workpiece material and process anomalies. The effects of time expenditures generated by personnel and systems are far greater.

Industry 4.0 highlights digital data capture, the Internet and cloud-based storage, but those components are only part of the solution. In the end, the collected data must be analysed and a physical model or map constructed that defines the process in question.

In the cyber-physical systems, collected data is compared to the map, and the system generates feedback to execute process modifications that will produce the desired results. Process control is accomplished not by a human but also by the computer analysing and comparing the data against the model in instantaneous real time.

Accordingly, the model stored in the cloud must accurately describe the elements of the process. Constructing such a model requires a full understanding of the operations. Unfortunately, machining presents a reality that is difficult to described exactly. For example, a model must recognize the dynamic properties of the workpiece material because changes in workpiece hardness result in varying cutting forces. But it is impossible to measure the hardness of every workpiece. And in some cases, the hardness of a workpiece might be ten percent higher than the material’s nominal hardness, leading to cutting forces that are ten percent higher as well.

A model that learns during the process of operation and modifies itself to provide an increasingly more accurate description of the process would be a partial solution to this process control dilemma.  But the technology has yet to advance to that point.

As a result, manufacturing engineers must know how a model was conceived and built to determine if its basis for management of the cutting process is valid. Then, if the parameters chosen via the model’s interaction with cutting data are questionable, the engineer will know the basis on which the choices are made and can decide if they should be overruled. The cyber-physical system may control the metalcutting process, but it is the manufacturing engineer who maintains control over that system.

By consulting decades of field and research experience, Seco build and provide extremely accurate process models. These models are not closed box in form, but provide both in and out capability for process direction because human thought, experience and perspective are essential to the final success of the new Industry 4.0 manufacturing revolution.

The Practical Approach to Control Waste in Manufacturing (10 min read)